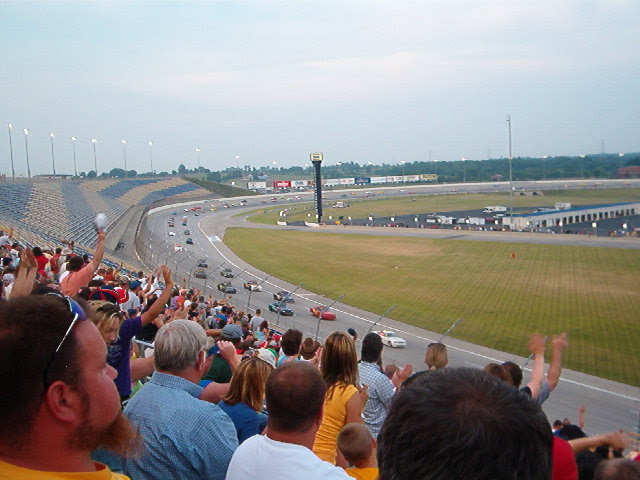 The latest chapter in the airport novel drama that is Kentucky speedway unfolded earlier this week when Speedway Motorsports Inc. (SMI) head and Kentucky Speedway's current owner Bruton Smith admitted he is willing to swap a date from one of SMI's 7 other tracks in order to get a Cup series race for Kentucky Speedway. As many of you know The previous owners of Kentucky Speedway sued NASCAR and track conglomerate International Speedway Corp. (both owned by the France family) for violation of antitrust laws... a couple years and many boring Busch races later, the lawsuit is in appeal and now Speedway Motorsports Inc. (owner of Bristol, Lowes, New Hampshire, Infineon, Las Vegas, Texas, and Atlanta) owns Kentucky and is Hell bent on acquiring a Cup series Race for the 1.5 mile oval.

Meanwhile the media has been chasing their tails trying to predict which track will lose a date. Atlanta’s poor attendance has become a giant bulls eye on its back, while lack luster racing at Lowes and Texas has put those two SMI workhorses on the chopping block. Yet ironically the track that most analysts have agreed will lose a date is a one of a kind 1 mile oval that one of the longest sellout streaks in NASCAR. Not to mention its one of only a few facilities north of the Mason Dixon. That’s right; recently purchased New Hampshire raceway is considered the most likely candidate to donate a cup race date to Kentucky.

Through all this non-sense I am wondering about the one question everybody seems to have forgotten. Does Kentucky even deserve a Cup race? Kentucky is a 1.5 mile with 14⁰ banking. Sound Familiar? It should because that is roughly the same configuration as the majority of other cup tracks. And these are the tracks where the racing usually involves single digit lead changes, double digit margins of victory, and an overall snooze fest.  And save for a few surprise winners, Kentucky Nationwide series races are mediocre at best. In fact the Kentucky NWS race’s only saving grace is that because there is no cup race, there are less cup drivers in the field giving full time NWS a rare opportunity to shine. Is this really what NASCAR needs right now, another boring race during times when fans are finding more and more reasons not to watch a race or buy tickets? No it is most certainly not. And that is why there is zero justification for staging a Cup Series event at Kentucky.

The Movers and Shakers of NASCAR seem hell bent on exploring new market areas regardless of the on-track product. Bruton Smith is no exception; he is apparently more than willing follow the current trend of abandoning core fans in favor of acquiring more pigeons to shell out ticket money to an overhyped event. Kentucky Speedway is slated to become the next California, the 2 mile abomination in Fontana that has become one of the most highly promoted yet boring races on the schedule. If any track is to be replaced it should be tracks like California and Kentucky, and only if it were to be replaced by a short track or superspeedway, both of which are severely un-represented in NASCAR.

Posted by TheShackle at 3:15 PM No comments:

TheShackle
I've been a nascar fan since I was 5, and an amatuer racer since i was 17. After flooding too many forums with my complaints about nascar i've decided to expand my complaints to the blogosphere as well as offer up a solution or two.